The eye is the organ which helps us to see. It features several components which work in conjunction to give us sight. This includes the cornea, iris, pupil, lens, retina, macula, optic nerve, choroid and vitreous.

What is the anatomy of the human eye?

How many parts does the human eye have?

The human eye is a complex organ with parts that work together to help us see. There are three layers of the human eye:

What do the parts of the eye do?

Each part of the eye performs a different function enabling us to see. 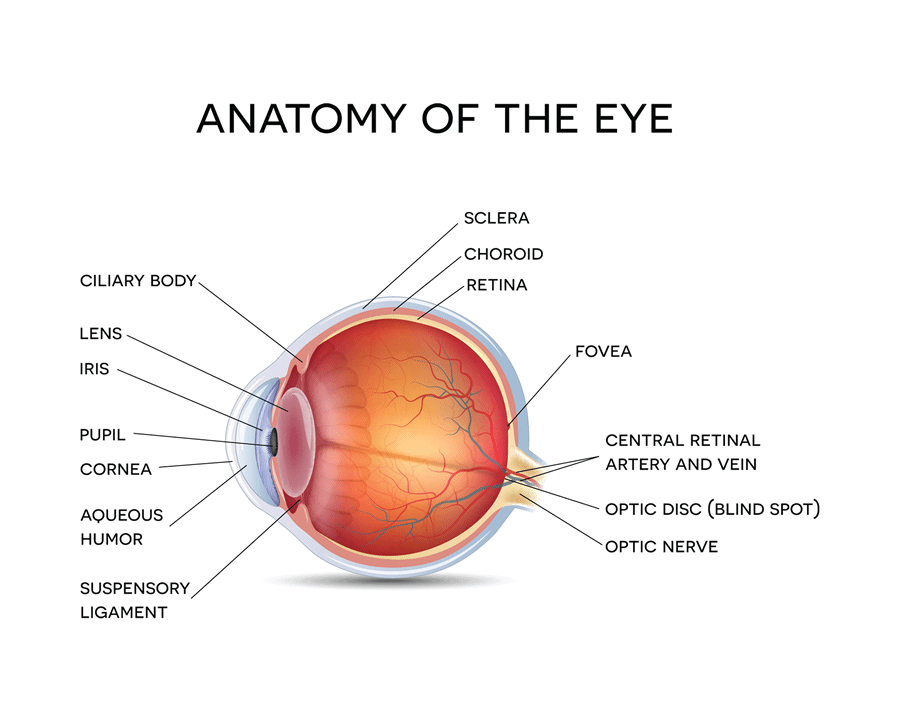 Iris - this is the colored part of the eye which features the pupil in the middle. It controls the amount of light entering the eye so that the pupil closes in bright conditions, to let less light into the eye. The pupil also opens in dark conditions, to allow more light in.

Pupil - this is the round centre in the iris through which light passes through. The opening and closing of the pupil is often compared to the aperture in a 35mm camera.

Cornea - this is the clear part at the front of the eye which focuses light into the eye. The cornea has multiple layers. The outer layer acts as a shield to the deeper layers which serve the purpose of strengthening the eye. The cornea maintains its clarity by being relatively dehydrated in consistency compared to other tissues in the wall of the eye (sclera / white of the eye). Pumps on the inside of the cornea continuously pump fluid that seeps into the cornea back into the eye. There are no blood vessels in the cornea, making it highly sensitive to pain. Contact lenses are placed on the cornea for visual correction.

Lens - located behind the pupil, the crystalline lens allows the eyes to focus on small details. It adjusts, becoming thinner or thicker. As we get older, our lens deteriorates preventing us from seeing in as much detail, which is why we require reading glasses.

Macula - located in the retina, the macula is the small central area containing light sensitive cells which allow us to see in fine detail. It is responsible for processing sharp images, giving us the ability to see fine detail so that we can have 20/20 vision.

Optic Nerve - an electrical cable consisting of over 1.2. million nerve fibres which transmit electrical impulses from the retina to the brain.

Retina - a layer of nerves lining the back of the eye, the retina contains light-sensitive cells called rods and cones. It converts light into chemical and nervous signals which travel to the brain through the optic nerve.

Choroid - the middle layer of the eye located between the retina and the sclera. It contains connective tissues and supplies nutrients to the outer retina.

Fovea - also known as the fovea centralis, the fovea is responsible for providing the highest visual acuity, producing the sharpest vision and the greatest colour contrast.

Optic disc - also referred to as the ‘blind spot’ or optic nerve head. The optic disc is a circular area at the back of the eye where the optic nerve connects to the retina.

Sclera - the white outer layer of the eye surrounding the cornea. It supports the eyeball and protects it against rupture.

Rod cells - photoreceptor cells located in the retina at the outer edges. These cells can function in low light and are responsible for peripheral vision.

Cone cells - also located in the retina, these light-sensitive cells function best in bright light and are responsible for colour vision.

Vitreous humor - a transparent jelly-like substance which fills the eyeball behind the lens.

How the human eye works step by step

The way in which the human eye works can be likened to a camera:

In addition to the parts which form the anatomy of the eye, there are six extraocular muscles which control eye movement. These muscles include:

There are different types of eye movement controlled by the six muscles in the eye. This includes:

A guide to peripheral vision
Do I need an eye test?
A guide to myopia
Top